The San Diego County Water Authority today responded to a report by the San Diego Taxpayers Educational Foundation that studied labor costs at the agency between 1999 and 2009.

“The Taxpayers Educational Foundation and the San Diego County Taxpayers Association serve important roles informing our community on issues impacting taxpayers and water ratepayers,” said Maureen Stapleton, general manager of the Water Authority.  “The Taxpayers’ study focuses primarily on how much labor costs at the agency rose between 1999 and 2009.  We believe it is equally important for ratepayers to be fully informed why the Water Authority’s workforce and labor costs grew during the decade.  The Taxpayers’ report does not provide an equal focus on that part of the story.

“Ratepayers need to know what value they receive for their dollars.”

The Water Authority’s workforce grew between 1999 and 2009 to support new historic water supply reliability programs and the peak planning and construction period for its $3.5 billion Capital Improvement Program, including:

“Until this past decade, San Diego County was over-reliant on a single supplier to meet up to 95 percent of this region’s water needs,” Stapleton said.  “Today, with the investments in the Imperial Irrigation Water Transfer, canal lining projects and other programs and projects, our region has a more diversified, and more reliable water supply.” 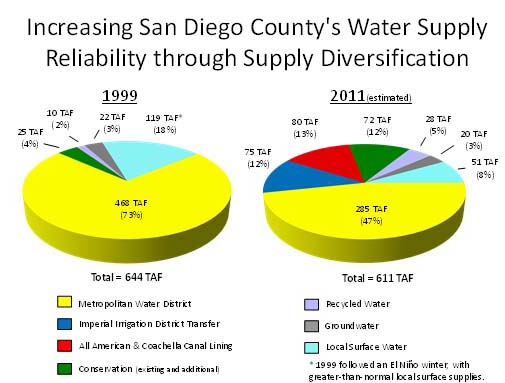 Stapleton also called the period covered in the Taxpayers’ report “the biggest decade in the agency’s history for building new, large-scale water infrastructure to serve our region.”  The following graphic depicts the Water Authority’s infrastructure as it existed in 1999, compared to today. 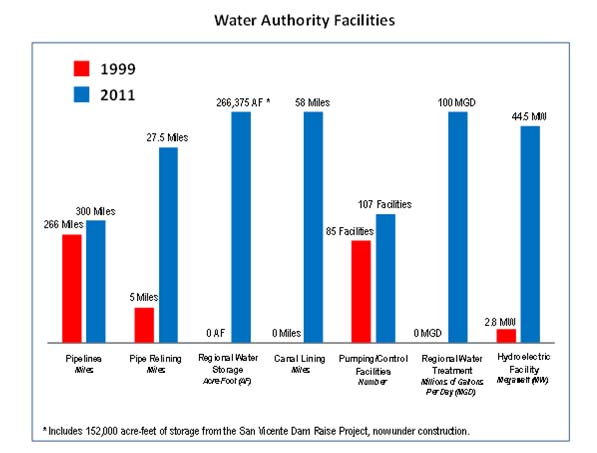 “These investments support the region’s $186 billion economy and 3.1 million people, and will continue to serve our region for generations to come,” said Michael T. Hogan, chair of the Water Authority’s Board of Directors. “The region’s residents and businesses have received very strong returns for their investments in new long-term water supplies and infrastructure projects.”

“The Water Authority is undergoing the largest workforce reduction in our agency’s history and taking other measures to manage labor costs,” Stapleton said.

Measures the Water Authority has taken since 2009 include:

Labor costs represent only about 6 percent of the Water Authority’s budget, and are not significant drivers of recent rate increases, Stapleton noted.

One of the biggest drivers of recent and projected water rate increases is increased water supply and transportation costs imposed by the Metropolitan Water District of Southern California, the San Diego region’s largest supplier.  The cost to purchase treated water from MWD increased 94.6 percent from 2003 to 2012.  In addition, the rates MWD charges the Water Authority to transport its independent Colorado River supplies through MWD’s conveyance and distribution system have increased 56.5 percent over the same period.

The Water Authority alleges that MWD improperly overcharges the Water Authority for the transportation of its independent Colorado River supplies and uses that money to subsidize the cost of MWD water to its other 25 member agencies. This violates California’s Constitution, other state law, and standard water utility practice.  In June 2010, the San Diego County Water Authority Board of Directors unanimously approved filing suit against MWD over its rate structure.

MWD’s rate structure causes significant financial harm to the San Diego region. San Diego County will be overcharged by about $40 million in 2012; those overcharges will grow to as much as $220 million annually by 2021, and total as much as $2.1 billion over the next 45 years.  The case is being heard in San Francisco Superior Court.  More information on the rate challenge is available at www.sdcwa.org/mwdrate-challenge.

“The Water Authority is dedicated to ensuring our region has a safe and reliable water supply,” Hogan said.  “We understand ratepayers want to make sure their dollars are being spent wisely and prudently to achieve that mission.”

The Water Authority is recognized nationally for its sound financial management practices.  It has received the Certificate of Achievement for Excellence in Financial Reporting from the Government Finance Officers Association of the United States and Canada for 11 consecutive years.   It also received the 2010 Excellence in Budgeting Award from the California Society of Municipal Finance Officers.

More financial information about the Water Authority is available at www.sdcwa.org/financials-investor-relations.