The San Diego County Water Authority’s General Manager on Thursday recommended a $1.5 billion budget for fiscal years 2014 and 2015, up 5.2 percent from the current two-year budget mostly because of higher costs for the purchase and treatment of imported water.

Expenses were held in check by a lower budget for the Water Authority’s Capital Improvement Program, which decreases by 20 percent in the recommended budget as major projects near or reach completion. In addition, the Water Authority is continuing to streamline the organization through restructuring efforts after a series of major cost-cutting and staff-reduction moves in the prior two-year budget.

“This recommended budget exhibits our core values of continuous improvement and cost-effectiveness,” said Water Authority General Manager Maureen Stapleton. “It will help us navigate the fast-changing water supply outlook, and the legal and regulatory environments that we face so we can continue to provide a safe and reliable water supply to the San Diego region.” 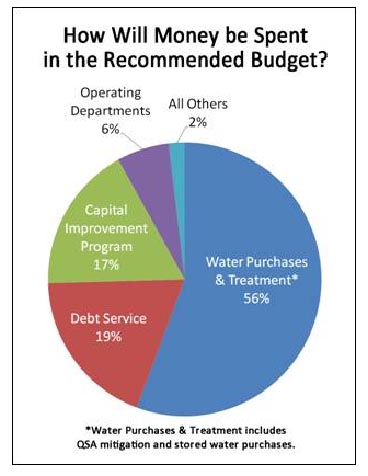 The Water Authority will hold two workshops in June to review the recommended budget, and the Board of Directors will consider budget adoption on June 27. The Board is also reviewing proposed 2014 water rates for possible approval during its June 27 meeting. On May 15, the Water Authority staff announced a proposed “all-in” rate of $1,029 per acre-foot for untreated water (an increase of 2.6 percent) and a proposed “all-in” rate of $1,303 per acre-foot for treated water (an increase of 3.5 percent). The “all-in” water rate is the estimated average cost of water that includes the Water Authority’s rates for supply, treatment (if applicable) and transportation, along with charges for storage and customer service. Actual figures will vary among the Water Authority’s 24 member agencies.

While the Water Authority’s budget spans two fiscal years, the agency sets rates annually to ensure it can most effectively manage changing conditions.

The biggest factors behind the Water Authority’s recommended two-year budget increase of $74 million are related to the purchase and treatment of water. Those costs are projected to rise by 18 percent in fiscal years 2014 and 2015 compared to the current budget, partly because of scheduled increases in the the cost of water from the Imperial Irrigation District as part of a long-term conservation-and-transfer program approved in 2003. In addition, the Los Angeles-based Metropolitan Water District of Southern California will charge 5 percent more for treated water in 2014.

As scheduled, the Water Authority is also increasing contributions for environmental mitigation as part of the 2003 Quantification Settlement Agreement, a critical component of the region’s efforts to secure a more reliable long-term water supply.

Those increases are partially offset by $64.7 million decrease in funding for the Water Authority’s Capital Improvement Program in the recommended budget.  After more than a decade of major infrastructure projects, such as building Olivenhain Dam and raising San Vicente Dam, the Water Authority is transitioning to an era of less construction and greater focus on operations and maintenance. The recommended budget for operating departments is up just 1.5 percent from the current budget. That increase is in line with changes in the Consumer Price Index for San Diego, which rose by approximately 1.5 percent in 2012. Operating departments account for about 6 percent of the Water Authority’s overall budget.

The current budget – for fiscal years 2012 and 2013 – is 16 percent smaller than the previous two-year budget because the Water Authority aggressively adapted to changing conditions that included lower water sales and a sluggish regional economy. The Board deferred $150 million in spending on 14 capital projects, and the Water Authority eliminated 30.75 full-time staff positions.

To read the Water Authority’s recommended budget, go to www.sdcwa.org/budget.