The San Diego County Water Authority Friday filed a lawsuit against the Metropolitan Water District of Southern California over its adopted wholesale water rates for calendar years 2013 and 2014.

The new lawsuit is necessary because the case filed by the Water Authority in June 2010 – challenging MWD’s water rates for 2011 and 2012 and raising many of the same issues presented in the new lawsuit – has not been resolved.  Although the Water Authority had hoped for a speedy resolution of the 2010 case, MWD has engagedin a series of unsuccessful legal maneuvers designed to block discovery orders by the court and otherwise impede progress of the case.  As a result, there is still no trial date set for the 2010 action, which remains pending before San Francisco Superior Court Judge Richard Kramer.

Given the applicable statutes of limitation, the Water Authority had no alternative but to file the new lawsuit because MWD’s 2013 and 2014 rates once again would overcharge San Diego County water ratepayers.  These overcharges will amount to more than $50 million annually in 2013 and 2014.  The new lawsuit, filed in Los Angeles County Superior Court, alleges that rates adopted by MWD on April10, 2012 violate common law, California statutes, and the California Constitution, including Proposition 26.  Specifically, the lawsuit alleges:

“MWD’s water rates are nothing more than a naked redistribution of ratepayer dollars from San Diego County to agencies located in other Southern California counties,” Water Authority Board Chair Michael T. Hogan said. “This action is necessary to protect our region’s $186 billion economy and our 3.1 million ratepayers from billions of dollars in overcharges through the payment of water rates that will not deliver one drop of water or other benefit for San Diego County water ratepayers.

“It is clear that costs incurred by MWD to pay for State Water Project and local water supplies like recycled water and seawater desalination have nothing to do with the cost of transportation,” Hogan said. “MWD’s own experts have said as much.  It is even more outrageous to force San Diegans to pay costs through MWD’s Water Stewardship Rate when MWD’s board voted last year, under a “poison pill” provision it devised, to bar the Water Authority and its ratepayers from any access to that funding, as retaliation for questioning MWD’s water rates in court.

“From the statewide perspective, we fear that MWD’s flawed rates will ultimately be the nail in the coffin of ongoing efforts to implement a sustainable Bay Delta solution,” Hogan said.

The Water Authority repeatedly advised MWD staff and board members of the flaws in MWD’s proposed rates for 2013 and 2014 during the rate-setting process earlier this year, and tried to persuade the board to adopt lawful rates that meet industry standards. Prior to MWD’s April 10 vote, the Water Authority submitted letters and written testimony amounting to more than 5,000 pages of documents, including a detailed report prepared by rate industry experts.  These documents described in detail why MWD’s proposed rates and charges were not consistent with the law, and detailed the improper activities by the secret group controlling MWD’s board.  However, MWD’s board proceeded to adopt rates without any discussion of the concerns raised by the Water Authority.

In its lawsuit, the Water Authority is also seeking to address another major flaw in MWD’s rates: MWD’s failure to properly recover tens of millions of dollars annually in operational and other costs MWD incurs to serve as a “standby” supplier for its member agencies whose water demands vary greatly from year to year.

MWD has not performed adequate studies or calculated the costs of purchasing, storing and delivering water supplies to meet the highly variable dry-year needs of some of its member agencies. Instead, MWD misallocates many of these costs in its other rates.  This misallocation again forces steady MWD customers, such as the Water Authority, to pay a disproportionate share of the costs of providing this service.  This annual benefit is estimated at $40 million to the city of Los Angeles alone, which has historically has raised and lowered its annual purchases of MWD water by more than 200,000 acre-feet.

“This is a huge benefit to the city of Los Angeles that that our ratepayers end up paying for,” Hogan said. “If ratepayers in other counties and parts of Los Angeles want to pay these costs on behalf of LADWP ratepayers for some reason, even though they are not lawfully required to do so, that’s their prerogative. But, we don’t choose to do that.” 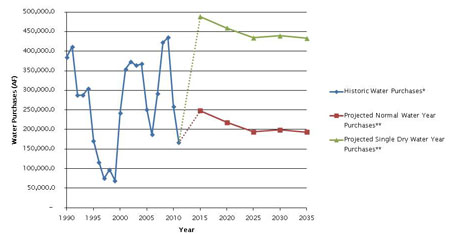 The lawsuit also seeks to require MWD to conduct the business of MWD in public view, as California law requires.  The laws governing MWD’s business conduct require it to act exclusively through its board of directors.   Under a California Public Records Act request sent last October, the Water Authority obtained thousands of pages of documents that detailed the inner working of a group of more than 15 MWD member agencies that met in secret and in concert with MWD executive management to ensure the adoption of MWD water rates that are the subject of the Water Authority’s lawsuits.

With the rate increases adopted by MWD on April 10, MWD will have nearly doubled water rates since 2006.  MWD’s finances are heavily reliant on water sales, and MWD’s water sales have declined by 30 percent since 2008 and are projected by MWD to remain far below historic levels on a long-term basis.

“Despite sharply declining sales, MWD has failed to make the kinds of spending cuts every other government agency and water district in Southern California has had to do,” Hogan said.  “Instead of cutting its budget, MWD increased it.  Instead of reducing its workforce to match its long-term lower sales, MWD’s adopted budget will increase staffing by more than 40 new positions.

“MWD’s pattern and practice of combining high annual rate increases with increased spending is not sustainable,” Hogan said.  “It’s far past time for MWD to confront its serious fiscal challenges and make necessary changes to ensure its long-term fiscal sustainability.”

The stakes in the litigation have been estimated at $2 billion to $3 billion over a 45-year period.  The Water Authority estimates its ratepayers will pay more than $50 million per year in 2013 and 2014 alone in gross transportation overcharges under MWD’s adopted water rates.

To view of copy of the new complaint challenging MWD’s 2013 and 2014 rates, click here: www.sdcwa.org/sites/default/files/files/news-center/top-issues/ComplaintMWDlawsuit2.PDF

To view a copy of the complaint challenging MWD’s 2011 and 2012 rates, click here: www.sdcwa.org/sites/default/files/files/water-management/ratechallenge/2ndAmendedPetition.pdf