The Water Authority is developing an array of energy initiatives designed to control the costs of electricity needed to produce, treat and distribute water to the region’s residents and businesses. 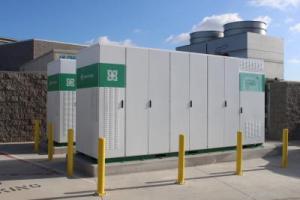 The Water Authority is preparing to use state grant funds to install a large-scale battery system that will save money by storing low-cost power for use during high-cost periods.

While water reliability will always be the Water Authority’s primary focus, the agency’s Energy Program helps reduce energy costs and, in turn, helps stabilize the cost of water. The program aims to help the San Diego region maximize the use of renewable energy sources and meet escalating state mandates for clean power.

Water Authority projects generate energy from solar panels, a turbine inside a large-diameter pipeline and a pumped storage facility at Lake Hodges that has become an increasingly important part of meeting regional energy needs. The Water Authority also has secured a contract for clean hydropower from the Boulder Canyon project on the Colorado River.

In May 2017, the Water Authority’s Energy Program took another step forward with a $1 million grant from the California Public Utilities Commission to install an industrial-sized battery storage system. The project is expected to save the Water Authority nearly $100,000 per year in energy costs at the Water Authority’s Twin Oaks Valley Water Treatment Plant. The battery system will help the Water Authority store low-cost power – either excess solar energy or retail energy purchased during off-peak hours – for later use during high-demand periods.

This new ability to store energy builds upon the Water Authority’s achievements in reducing its energy costs and its impact on the environment through facilities generating power from solar energy. The Water Authority has already installed more than 7,504 solar panels total at three facilities – the Twin Oaks plant, the agency’s Kearny Mesa headquarters and its operations center in Escondido. The total output of these systems is estimated to be 2.7 million kilowatt-hours of renewable energy annually, enough to reduce the agency’s energy expenses by nearly $5.6 million over 20 years. 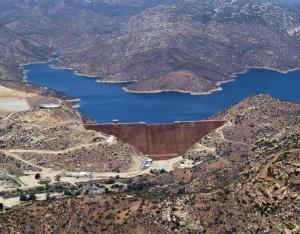 The Water Authority and the City of San Diego are exploring an energy storage project at San Vicente Reservoir near Lakeside.

In addition, the Water Authority and the City of San Diego are evaluating a major energy storage project at San Vicente Reservoir near Lakeside that could become a linchpin in the region’s green energy infrastructure. The Water Authority also is exploring the potential for installing floating solar panels on a reservoir.

The connection between water and energy is important locally and statewide, in part because the rising cost of energy is driving up the price of water from every major source. About 2 percent of the total energy used in California is for transportation and treatment of water. About 10 percent is for heating, cooling and other uses of water in homes and businesses.

In 2013, the Water Authority’s Board of Directors adopted an Energy Management Policy which provides direction on how the agency implements and administers energy projects and programs where economies of scale, geographic considerations, or member agency circumstances make a regional approach advantageous.