The San Diego County Water Authority’s Board of Directors on Thursday voted to approve a landmark agreement to purchase up to 56,000 acre-feet of water annually from what will be the nation’s largest seawater desalination plant in Carlsbad, Calif.  The plant is expected to start producing up to 50 million gallons a day in 2016.

The Board approved a 30-year Water Purchase Agreement with project developer Poseidon Resources. The reverse-osmosis facility will make local water supplies more reliable by reducing the region’s dependence on water from the Colorado River and the Bay-Delta that is vulnerable to droughts, natural disasters and regulatory restrictions.

“We are now putting another big piece of our diversification plan in place that will help protect our region’s $186 billion economy from the potential shortages and the uncertainty created by heavy reliance on imported water,” said Thomas V. Wornham, Chair of the Water Authority’s Board of Directors.

“Adding desalination to our portfolio is monumental in the same way that importing water from the Colorado River was in the 1940s,” Wornham said. “We are making this investment not only for our own security but to maintain our quality of life for future generations.”

With the agreement approved, Poseidon and the Water Authority will approach the bond market to secure financing by the end of 2012. The next major step is commencing construction of the desalination plant next to the Encina Power Station and a 10-mile pipeline that connects it to the Water Authority’s aqueduct in San Marcos. Throughout construction, Water Authority staff will monitor work to make sure contractors comply with terms in the Water Purchase Agreement.

By late 2015, the Carlsbad facility is scheduled to begin start-up testing. Commercial operations are expected early the following year. Poseidon’s plant will produce 48,000 to 56,000 acre-feet of desalinated seawater annually, roughly one-third of all water generated in San Diego County. Two Water Authority member agencies, Vallecitos Water District and Carlsbad Municipal Water District, will purchase a combined total of 6,000 acre-feet of the desalinated water as their own local supply under separate agreements with the Water Authority.

The Water Purchase Agreement protects Water Authority ratepayers by assigning development and operations risks to Poseidon. For instance, the Water Authority will not have to make payments to Poseidon until the company produces water that meets predetermined quantity and quality standards. In addition, Poseidon is responsible for all cost overruns during construction. After 30 years of plant operation, the Water Authority has the option – but not the obligation – to purchase the plant for $1. The agency also has the right to buy the facility after 10 years, though it isn’t required to do so.

Under the Water Purchase Agreement, the total price for the desalinated water – including related upgrades to the Water Authority’s pipelines and treatment plant – is projected to start between $2,041 and $2,290 per acre-foot (in 2012 dollars), depending on how much is purchased annually.  (An acre-foot is approximately 325,900 gallons, or enough to supply two typical single-family households of four for a year.) The purchase agreement says the price of water from Poseidon can only be adjusted for inflation and certain predefined circumstances.

The project will inject hundreds of millions of dollars into the local economy. A report commissioned by Poseidon forecasts more than 2,300 jobs in San Diego County created by the plant over the 32-month construction period. Once the facility is operating, it is projected to support nearly 600 jobs through direct and related spending.

As construction gets under way, the Water Authority will conduct a comprehensive cost of service study to determine precisely how expenses related to desalinated water will be split among the Water Authority’s rates and charges. Ratepayers can expect to spend $5 to $7 more a month to pay for the new supplies from the sea – though costs will vary by member agency.

While that water initially will cost more than current sources, analysis by the Water Authority shows that imports from the Metropolitan Water District of Southern California could be more expensive than desalinated seawater by the late 2020s.

“This significant investment makes economic sense in the long run when you consider the sharply rising costs of imported water,” said Maureen Stapleton, general manager of the Water Authority. “In addition, the Carlsbad plant will give the region an extra measure of reliability in our water supply, regardless of the annual hydrology on the Colorado River or the Sierra Nevadas.”

Desalination is just one part of the Water Authority’s long-term strategy to reduce what was once near-total reliance on a single supplier, MWD. After a severe drought in the early 1990s led to a 31 percent cut in water deliveries from MWD – and threatened 50 percent cutbacks – elected officials, civic leaders and water officials in San Diego County vowed not to let that happen again and developed a plan to enhance the region’s water reliability through supply diversification. 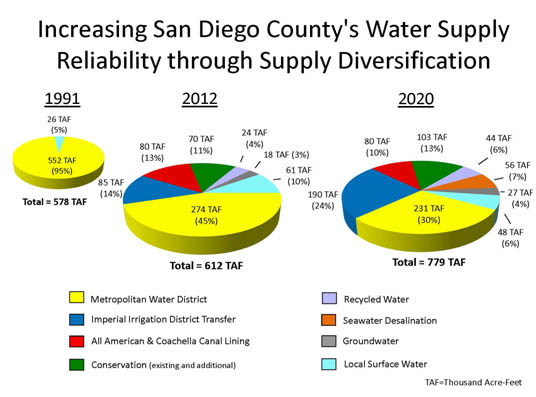 Over the past 20 years, the Water Authority has successfully transformed the region’s supply mix by implementing the nation’s largest agriculture-to-urban water conservation and transfer agreement with the Imperial Irrigation District; securing additional long-term, highly reliable Colorado River water supplies through canal-lining projects in the Imperial Valley; and by assisting member agencies in developing their own local water sources.

In addition, the Water Authority built dozens of new facilities over the past decade as part of its $3.5 billion Capital Improvement Program. The agency is nearing completion of the San Vicente Dam Raise, the nation’s tallest dam-raise project, to expand local surface storage for emergencies and other shortage conditions.

The Water Authority also has been a leader in promoting water conservation since the early 1990s through supporting financial incentives for water-efficiency products, offering water conservation services and sponsoring legislation to strengthen indoor and outdoor water-conservation standards.  Per capita water use by homes and businesses in the San Diego region is currently 37 percent below 1990 levels, helping the region stretch its resources even as water agencies develop new supplies.