The new budget, a 16 percent decrease from the current two-year amended budget of $1.69 billion, features $235 million less spending on capital projects and a 7 percent decrease in the cost of operating departments.  It includes the elimination of 31.33 full-time equivalent positions and other organizational changes that reflect the Water Authority evolving into an agency more focused on operating, rather than building, major water facilities.  By the end of this two-year budget period, a total of 31.33 positions will be eliminated and an additional 4.42 positions will be reduced in Fiscal Year 2014, representing a 16 percent reduction in staffing since Fiscal Year 2008.  “This budget balances the need to keep investing in vital water supply reliability projects and programs to support our region’s $186 billion economy and 3.1 million residents with the need to make aggressive efforts to control costs and moderate rate increases,” said Michael T. Hogan, Water Authority Board Chair.  “These steps have helped to manage the rate increase for next year, which is being driven by continuing increases in the cost to buy and transport imported water, planned increases in debt service, and the need to recover our fixed costs over significantly reduced water sales volumes.”

Half of the rate increase is attributed to the increasing cost to purchase and deliver imported water.  The cost of water imported from Metropolitan Water District of Southern California, the Water Authority’s largest supplier, will increase 7.5 percent in 2012.

In addition, debt service costs are driving water rates higher.  Financing costs for the Water Authority’s $3.8 billion Capital Improvement Program – vital investments in dams, reservoirs, pipelines, a hydroelectric plant, a treatment plant and other major projects to improve reliability during dry years or emergencies – are set to increase to $280 million in fiscal years 2012 and 2013, an increase of 17 percent over the current two-year period.

Reduced water sales are the third major factor behind rising rates in 2012.  Extremely wet and cool weather conditions, economic recession and voluntary and mandatory water conservation have combined to reduce the Water Authority’s water sales by 38 percent since 2007.  These conditions require the Water Authority to increase the portion of its fixed costs recovered from every acre-foot of water sales.

The new treated water rate is estimated to increase an average household’s water bill in the San Diego region by approximately $3 per month.  The impact will vary by member agency.  This is in addition to any rate increases to households from their local retail water agency.

Cost-Control Measures and Use of Funds

The Water Authority’s budget for fiscal years 2012 and 2013 includes a number of cost-control measures designed to respond to expected and unexpected changes.

“Circumstances are very different than they were two years ago, and this budget was built to fit the ‘new normal’ condition moving forward,” General Manager Maureen Stapleton said.  “Our building activity will decrease, while major facilities will be put into operation.  At the same time, our region has greatly improved its water efficiency, thanks to the extraordinary conservation efforts of our community.  We have put great effort into re-sizing and re-structuring the Water Authority in response to these factors so that we can carry out our vital water supply reliability mission on a sustainable basis while, at the same time, minimizing costs to ratepayers.”

Cost-control measures in the new two-year budget include:

Of the total $1.42 billion budget, $1.3 billion, or approximately 92 percent, covers the cost of water purchases and treatment, capital improvement projects and debt service. For a summary of Use of Funds, see Figure 1 below.

At $700 million, the cost of water purchases and treatment represents 49 percent of the total budget, a $69.4 million decrease from the current two-year amended budget.  The Water Authority expects water sales to increase slightly over the next two years, but sales are not expected to return to pre-drought levels during this budget period due to decreased agricultural demand and because Water Authority staff expect most urban water users will continue to employ efficient water use practices many adopted when mandatory water use restrictions were in place between July 2009 and April 2011.

Water purchases and treatment includes the cost and treatment of water from MWD, which represents 62 percent of this budget segment, local treatment costs from the Water Authority’s Twin Oaks Valley Water Treatment Plant and the purchase and transporting of Colorado River water supplies the Water Authority secured by a conservation and transfer agreement with the Imperial Irrigation District and two water-saving canal-lining projects.  Also included are funds for the purchase of 5,000 acre-feet of water annually for storage in Lake Hodges and 20,000 acre-feet to start re-filling the San Vicente Reservoir following the completion of the San Vicente Dam Raise project.

Capital Improvement Program (CIP) expenditures total $321 million for the two-year period, 23 percent of the budget and a decrease of $235 million from the current two-year amended budget.  As the CIP approaches completion, the Water Authority will begin to transition from an emphasis on building to a facilities operation and maintenance organization, significantly reducing the CIP budget.  The deferral of 14 projects totaling $150 million until at least July 2014 defers additional debt and potential rate impacts from those projects.  The majority of CIP expenditures will be spent on the continued construction of the San Vicente Dam Raise, which will provide an additional 152,000 acre-feet of emergency and carryover storage for the region.

Debt service, the third-largest budget segment at 20 percent, will increase to $280 million for the 2012 and 2013 fiscal years, up 17 percent from the prior two-year budget.

The Water Authority will generate $1.42 billion in estimated revenue for the next two fiscal years.  Approximately 87 percent of the Water Authority’s total revenue will come from water sales and net fund withdraws.

The largest source of funds, at $944 million or 67 percent, comes from water sales to member agencies.

Net fund withdraws of $285 million represent 20 percent of available funds, a 48 percent reduction from the prior two-year budget.  Net fund withdraws primarily draw from bond proceeds to fund the Capital Improvement Program.  The budget reduction reflects the reduction in funding for the CIP.

The remaining 13 percent of revenue comes from capacity charges, investment income, infrastructure access charges, standby charges, property taxes, hydroelectric revenue, contributions in aid of construction and other smaller revenue sources. For a summary of sources of funds, see Figure 2 below. 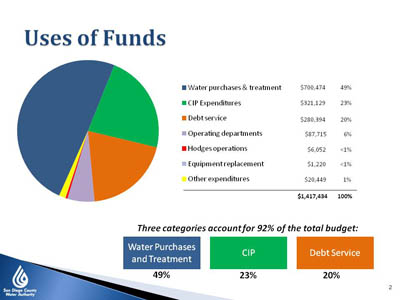 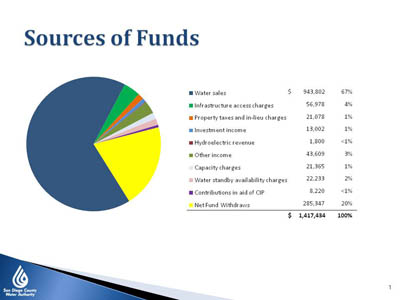