Six students from coastal schools received recognition from the San Diego County Water Authority at the board’s April 22 meeting for their water technology projects in the 2004 Science and Engineering Fair. Each student received a plaque and a monetary award from Bernie Rhinerson, Water Authority board chairman for his or her project.

In the junior division Rhinerson awarded Alan Joyce, from the Rhoades School in Rancho Santa Fe, first place honors, a $300 award and plaque from the Water Authority board for his project entitled “Effects of Runoff on Bacterial Levels of Escondido Creek.”

The San Diego County Water Authority is a public agency serving the San Diego region as a wholesale supplier of water from the Colorado River and Northern California. The Water Authority works through its 23 member agencies to provide a safe, reliable water supply to support the region’s $130 billion economy and the quality of life of 3 million residents. 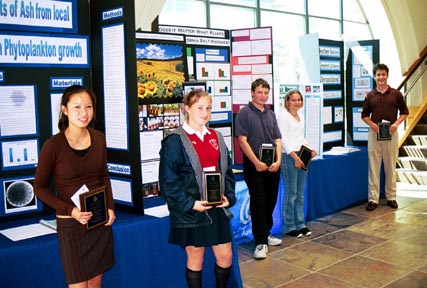