Actual changes to an individual’s water bill will vary, depending on the mix of water their local water agency purchases from the Water Authority and each agency’s own rate-setting decisions in coming months.

Three main factors are driving the increased rates for 2013: 1) increased costs from the Metropolitan Water District of Southern California; 2) increased debt service costs necessary to pay for the Water Authority’s $3.5 billion investments in major new water infrastructure projects; and, 3) an increase in the quantity and price of the Water Authority’s purchases of supplies from the Imperial Irrigation District. 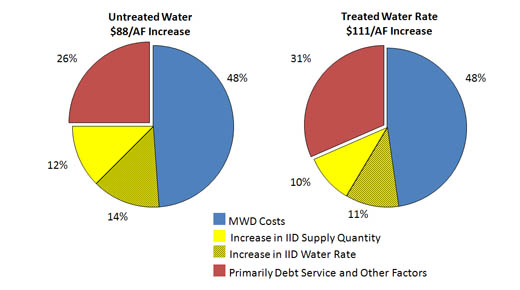 “The Board took a long, hard look at how to keep the 2013 rates as low as we could,” Water Authority Board Chair Michael T. Hogan said. “The adopted rates reflect the necessary balance of minimizing impacts to our region’s ratepayers, maintaining the Water Authority’s fiscal stability, and paying for vital water supply and infrastructure projects that provide increasing protection and benefits for our region’s $186 billion economy and 3.1 million residents now and for decades to come.”

The Board adopted the rates following a six-week review period and a public hearing at today’s board meeting.  The Board memo explaining the 2013 rates and charges is available at www.sdcwa.org/sites/default/files/files/rates-charges-approval-board-memo-2012_06_20.pdf.

MWD’s rate increase could have been even higher.  This spring, the Water Authority, its member agencies, and members of the public succeeded in persuading MWD to lower its 2013 average rate increase from an originally proposed 7.5 percent down to the approved 5 percent.  The Water Authority estimates the smaller MWD increase will save the San Diego region’s ratepayers $5 million in 2013.

“We will keep pushing MWD to reduce unnecessary spending that leads to inflated water costs for ratepayers here and throughout Southern California,” Hogan said.  “In addition, we are continuing to challenge MWD’s illegal water rates.  MWD’s rates discriminate against the Water Authority and harm our residents and businesses by forcing our region to pay MWD tens of millions of dollars in overcharges every year.”

The second factor driving the Water Authority’s 2013 rates is increases in payments for major water infrastructure investments made over the last two decades.  They account for about 26 percent of the untreated water rate increase and about 31 percent of the treated water rate increase.  The Water Authority is obligated to pay an additional $21 million in planned debt service costs to finance large-scale infrastructure projects such as the San Vicente Dam Raise (the largest single expansion of local reservoir storage in the county’s history, currently under way), the Olivenhain Dam and Reservoir, Twin Oaks Valley Water Treatment Plant, and additional pipelines, pump stations, and other projects necessary to operate and maintain the region’s water delivery and storage system.

“This exemplifies how we lowered costs to ratepayers in prudent, sensible ways that do not threaten our mission of water supply reliability or our financial stability,” Hogan said.   “If we didn’t lower the debt coverage ratio, the necessary rate increase in 2013 would have been 17.5 percent.  The reduced ratio, however, will continue to meet all bond covenants.”

Another portion of the rate increases is related to supplies from the Water Authority’s water conservation and transfer agreement with the Imperial Irrigation District.  IID supply costs account for about 26 percent of the Water Authority’s proposed untreated water rate increase and about 21 percent of the proposed treated water rate increase, with nearly half of these increases attributable to a 10,000 acre-feet supply increase next year. The IID transfer will provide 100,000 acre-feet of water in 2013, up from 90,000 acre-feet in 2012.  The cost of this water will increase 10 percent in 2013 under the terms of the agreement.

Supplies from the IID transfer and canal-lining projects provide vital water supply reliability benefits for the San Diego region and are more reliable than MWD supplies.

During the latest supply cutback from MWD, from July 1, 2009 to mid-April 2011, the Water Authority received approximately 264,000 acre-feet of supplies from the IID water transfer and the canal-lining projects.  These supplies reduced MWD’s 13 percent cutback to an overall 8 percent shortage for the Water Authority.

In addition to the water supply reliability benefits, the IID and canal-lining agreements improve the Water Authority’s control over the cost of a significant and growing portion of the region’s imported water supply.  MWD’s rates are set annually or biennially by MWD’s Board of Directors and have proved to be both unpredictable and far higher than MWD’s own projections.  In contrast, the price of supplies from IID is set according to an agreed-upon schedule through 2015.  From 2016-2034, IID supply increases are tied to the Gross Domestic Product Implicit Price Deflator index.  Over the most recent 10-year period, the GDP-IPD index has a compounded annual growth rate of 2.3 percent per year.  In comparison, MWD’s Tier 1 untreated water rate rose at a compounded annual growth rate of 7.3 percent between 2004 and 2014.