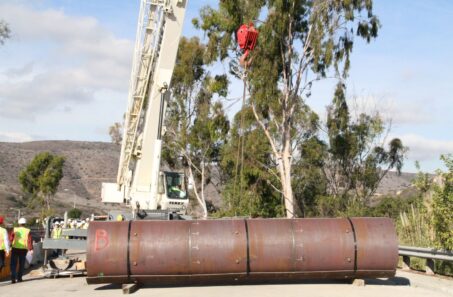 The San Diego County Water Authority’s pipeline relining program rehabilitates and extends the life of its aging water delivery pipelines. The relining process involves inserting steel lining into the existing pipeline to reinforce it and help prevent water leaks and breaks. This helps ensure a safe and reliable water supply for our region’s future.

In October 2008, Pipeline 4 failed in a fairly remote section of Mission Trails Regional Park, near the San Diego River. After the failure, the Water Authority performed forensic analysis on the pipe and determined that a short section of the pipe needed to be urgently relined with steel. Subsequently, from mid-February through mid-March 2009, the Water Authority relined approximately 1,200 feet of Pipeline 4 north and south of the San Diego River.

The project was completed in 2013.