The San Diego region will benefit from a historic water conservation-and-transfer agreement with the Imperial Irrigation District at least through 2047 after the San Diego County Water Authority’s Board of Directors took action Dec. 7 to ensure deliveries of those supplies for an additional decade. 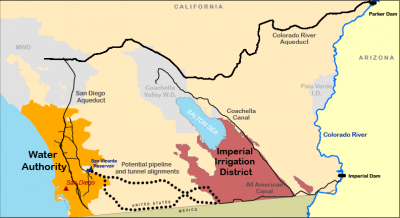 The Board voted unanimously to extend an Exchange Agreement with the Metropolitan Water District of Southern California by 10 years, requiring MWD to continue transporting conserved IID water to San Diego County through 2047. This year, about 20 percent of the San Diego region’s water is from the Water Authority’s conservation-and-transfer agreement with IID, and the volumes will continue to grow until 2021.

By extending the Exchange Agreement with MWD, the Water Authority gains 2 million acre-feet of conserved Colorado River water for delivery to the San Diego region between 2037 and 2047. Without that water, the San Diego region could face significant supply shortages during future dry years.

Click here to read a memo from the December 2017 Board meeting about the transfer decision.

The decision by the Water Authority Board has its roots in the historic 2003 Colorado River Quantification Settlement Agreement, which helped reduce California’s use of the river to its basic annual apportionment of 4.4 million acre-feet largely through water conservation-and-transfer agreements. 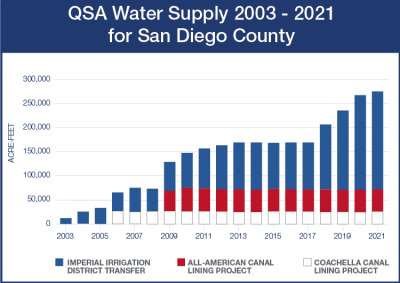 The Water Authority retains an option for a 30-year extension of the Transfer Agreement with IID – to 75 years overall – if both agencies agree. In addition, the Water Authority is assessing potential future water conveyance options that don’t depend on MWD – specifically, the cost and feasibility of building its own aqueduct from the Imperial Valley.

While a new conveyance facility would be a significant investment, it could deliver significant benefits, such as transporting conserved water from IID through 2077, if the Transfer Agreement is extended for an additional term. The conveyance facility could also transport water conserved by the lining of the All-American and Coachella canals. The Water Authority receives approximately 80,000 acre-feet a year for 110 years under a contract with the U.S. Department of the Interior.