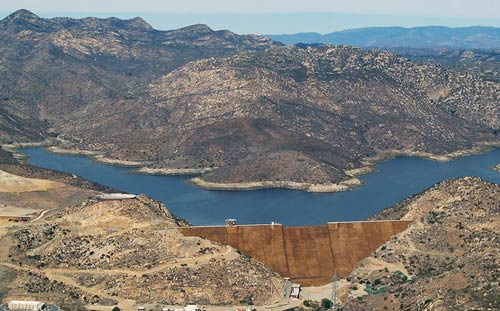 The San Diego County Water Authority has raised San Vicente Dam 117 feet, more than doubling the storage capacity of San Vicente Reservoir. The expansion represents the single biggest increase in water storage in San Diego County’s history. It is the largest dam raise in the U.S. and the tallest roller-compacted concrete dam raise in the world. The project was completed in spring 2014.

San Vicente Reservoir has a distinguished history. Constructed by the City of San Diego in 1943, it was the first reservoir in the county to receive imported water when the Water Authority’s First Aqueduct was completed in 1947. The original dam stood at 220 feet and stored up to 90,000 acre-feet for use by the City of San Diego.

The dam raise provides storage capacity for more than 157,000 acre-feet of water. The new capacity is owned by the Water Authority, and will be used to store water for dry years and emergencies such as an earthquake that curtails our imported water supplies. 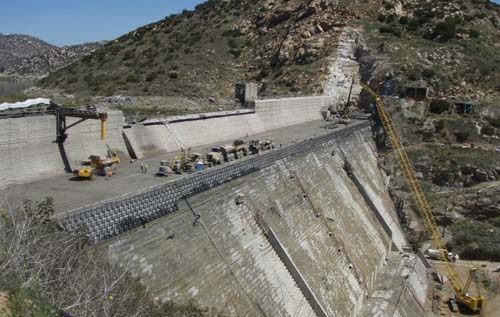 In April 2012 the original dam was still visible behind new roller-compacted concrete, which produces a stair-stepped appearance on the downstream side of the raised dam.

Workers placed the first layer of concrete for the foundation of the dam raise in September 2011. The new dam rose swiftly, reaching the top of the existing dam in May 2012, and its full height just four months later. Additional work will continue at the reservoir through 2015 to construct a new marina and replace a portion of the reservoir bypass pipeline.

The City of San Diego has continued to operate the San Vicente Reservoir during construction to supply its customers, and owns its original 90,000 acre-feet of storage capacity. The two agencies will share the cost of operating the expanded reservoir. The Water Authority and the City of San Diego are coordinating to set an opening date for San Vicente Reservoir, which is expected in late 2015. More details will follow when the date is announced. 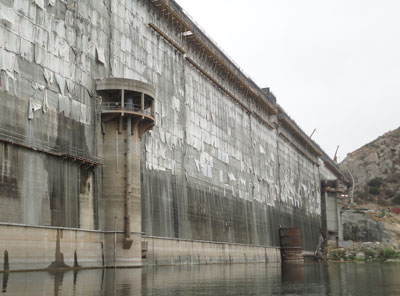 The original control tower, foreground, is dwarfed by the new dam. Construction continues on the new control tower at far right.

The San Vicente Dam Raise is the largest project of the Emergency Storage Project, a system of reservoirs, interconnected pipelines, and pumping stations designed to make water available to the San Diego region in the event of an interruption in imported water deliveries.

Click on Topside View   or  Downstream View for two vantage points of construction.  These high-resolution photos are updated every 30 minutes, providing a current snapshot of dam raise construction. The time-lapse sequences combine these photos, illustrating the construction process.