The San Diego County Water Authority’s Board of Directors on Thursday unanimously called upon the region’s residents, businesses and institutions to increase water conservation efforts in response to severe drought conditions across California.

The Board formally activated the agency’s Water Shortage and Drought Response Plan to preserve stored water reserves in Southern California in case dry conditions continue into next year. Additional water savings can also provide relief for other areas of the state more significantly affected by the drought by reducing the region’s need for imported water. The Board also approved notifying the Water Authority’s 24 member agencies that the region is at Level 1 Drought Watch of the region’s Model Drought Response Ordinance. In coming weeks, member agencies will consider what specific actions are necessary for their communities. 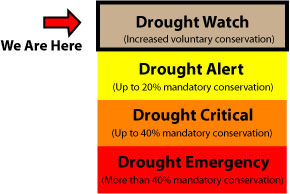 “The extraordinarily dry conditions and water supply challenges facing our state mean it’s time for each of us to go above and beyond our normal water-saving measures,” said Thomas V. Wornham, Chair of the Water Authority’s Board of Directors. “For some people, that will mean simply adjusting their irrigation system to eliminate runoff and overspray. For others, it could mean investing in a water-smart landscape makeover or buying a highly efficient clothes washer. If everyone answers the call, we can stretch our region’s supplies and do our part to help the rest of the state.”

The Water Authority is collaborating with its 24 member agencies to increase regional awareness of the need for additional water conservation. The Water Authority plans to fund outreach efforts using part of a $1 million state Drought Response and Outreach Program grant.

The Water Authority is not anticipating cutbacks to its imported water 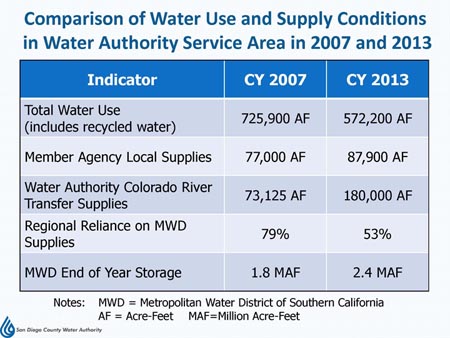 supplies this year that would trigger mandatory supply cutbacks to its member agencies. The region’s improved water supply reliability is the result of adequate reservoir storage in Southern California and two decades of investments by the San Diego region to diversify its water supply sources. These measures include securing water transfers that are part of the historic 2003 Colorado River Quantification Settlement Agreement. The Water Authority-Imperial Irrigation District water conservation and transfer agreement and related canal-lining projects will provide 180,000 acre-feet of highly reliable supplies to the San Diego region this year, more than double the amount they provided at the start of the last drought in 2007. (An acre-foot is about 325,900 gallons, enough to meet the needs of two average single-family households of four people for a year.)

In addition, the Water Authority has invested $2 billion over the past decade in new, large-scale water infrastructure projects that are contributing to a more reliable water supply. The Carlsbad Desalination Project, now under construction, is another important element of the Water Authority’s long-term strategy to improve the San Diego region’s water supply reliability. By early 2016, the project is expected to deliver up to 56,000 acre-feet of drought-proof, highly reliable water each year, enough water for 112,000 households.

Besides the recommended water-saving measures in local plans, numerous water conservation tips, tools and resources are available at www.WaterSmartSD.org, the Water Authority’s conservation website. They include rebate offers for replacing turf with water-smart landscapes, and purchasing highly efficient toilets and clothes washers. WaterSmartSD.org also includes a link to the Water Authority’s “eGuide to a WaterSmart Lifestyle,” a 140-page digital flipbook packed with practical and inspirational ideas for improving water-use efficiency indoors and outdoors.

Per capita potable water use in the San Diego region has decreased about 27 percent since 2007, and local cities and water districts are on pace to meet their state-mandated water-efficiency targets for 2020. Total regional consumption of potable water in fiscal year 2013 was 24 percent lower than in fiscal year 2007.

“Thanks to investments and commitment by residents, businesses and our agricultural communities, the San Diego region has been a statewide leader in conservation for the past two decades, and that has really prepared us to weather the current drought,” Wornham said.

The Water Authority will continue to monitor late-winter weather and water supply conditions so the Board can adjust its response as needed.

Gov. Jerry Brown declared a drought-related state of emergency Jan. 17 after two consecutive dry years and the start of a third. The Department of Water Resources’ snowpack survey in late January showed water content levels at 12 percent of normal for that time of year. The State Water Project is not currently projected to deliver any new water this year, but that preliminary forecast could improve if late-winter storms bolster snowpack levels.

The Colorado River Basin, Southern California’s primary imported water source, is faring better with the snowpack at about 100 percent of average for this time of year. However, 11 of the past 14 years have been dry in the Colorado River Basin, and the system’s main reservoirs collectively are less than half full. Locally, precipitation at Lindbergh Field was only 43 percent of normal between Oct. 1 and Jan. 31.

For more information about water supply and demand in San Diego County, go to www.sdcwa.org/drought-response.