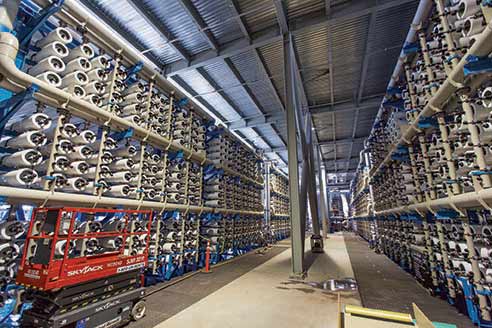 The Claude "Bud" Lewis Carlsbad Desalination Plant is a key component of the San Diego region's efforts to maintain a safe and reliable water supply no matter the weather.

The Water Authority's water supply diversification strategy is providing significant regulatory relief under state water-use rules adopted in May, though  it remains critical for residents and businesses across the region to continue using water efficiently.

The Water Authority and its member agencies have sufficient water supplies to meet demands even during three additional dry years and won’t be subject to state-mandated water-use reductions through January 2017, according to Water Authority calculations.

The State Water Resources Control Board has posted self-certification figures from water agencies around the state here. All 24 Water Authority member agencies have a “stress test conservation standard” of 0 percent, which means no additional state water-use mandates under the current rules.

The Water Authority's Board of Directors voted unanimously in June 2016 to take a regional approach to the state’s recently approved process for certifying supply sufficiency for the Water Authority’s 24 member agencies and establishing a new long-term drought awareness initiative.

San Diego County residents and businesses reduced water use by 22 percent while state-mandated water-use reductions were in effect from June 2015 through May 2016, beating the state’s aggregate regional target of 13 percent. Conserved water has been stored locally for future use in case drought conditions worsen or an earthquake or other disaster interrupts imported water deliveries.

Even though the San Diego region has sufficient water supplies, the Water Authority has launched the Live WaterSmart campaign to promote long-term water-use efficiency. The Water Authority is an industry leader in water-use efficiency efforts, with resources such as award-winning, water-efficient landscaping classes for homeowners; a video version of the classes to increase public access; a water waste reporting app for smartphones; free water-use checkups for residents and businesses; and incentive programs. Details are at WaterSmartSD.org.

The Water Authority also will continue to raise awareness about wasteful water practices prohibited statewide, such as irrigating lawns so as to cause runoff or within 48 hours after measurable rain. While most of California remains in drought, significant rain and snow last winter helped refill major reservoirs in Northern California and boost projected deliveries from the State Water Project to 60 percent, the highest since 2012. That prompted the Metropolitan Water District of Southern California to end its supply allocations in May 2016, setting the stage for the Water Authority Board to end allocations to its member agencies the same month.

Also in May 2016, the State Water Board replaced state-mandated conservation targets with a supply-based approach that considers each agency’s specific situation and water supplies – an approach the Water Authority and others sought for more than a year. The State Water Board also approved allowing wholesalers such as the Water Authority to certify supply sufficiency for their regions if every retail agency they service agrees.

The State Water Board has permanently prohibited practices that waste potable water such as:

Even with the changed regulations, it’s important for homes and businesses in the region to use water wisely at all times and abide by state and local rules prohibiting water waste. For information about water-use rules by community, go to Local Agency Water Restrictions.

Starting in June 2015, the State Water Board’s water-use regulation directed Water Authority member agencies to reduce water use by 12 to 36 percent compared to 2013 baseline levels. Total regional potable water use in San Diego County declined by 22 percent from June 2015 through May 2016, beating the state’s initial aggregate target of 20 percent for the San Diego region during the initial phase of emergency regulation. Conserved water has been stored in the recently expanded San Vicente Reservoir since May 2015.

In March 2016, state regulators certified the supply of potable water from the Carlsbad desalination plant as drought-resilient, reducing the regional impacts of the state’s emergency water-use mandates. Certification lowered the regional aggregate water conservation goal to about 13 percent, though water-use targets continued to vary by local water agency.

The Water Authority worked closely with the state to ensure that local member agencies benefited from investments in the nation’s largest seawater desalination plant, which opened in December and produces about 50 million gallons per day of high-quality, drought-proof water that reduces the region’s reliance on other water sources. The Water Authority also strongly advocated for a flexible and locally based approach to drought management that balances available supplies and demands.